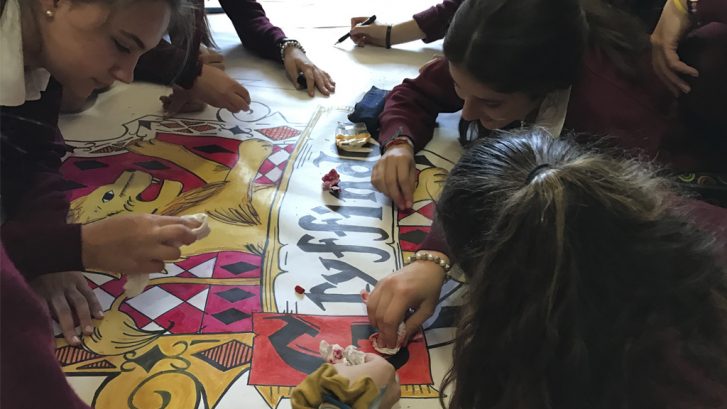 On the 16th March 2017, Fuenllana became Hogwarts School of Witchcraft and Wizardry celebrating everything and anything about Harry Potter for English day.

For two weeks beforehand, in their English classes, the students from Primary prepared and decorated the classrooms and corridors creating the illusion of Hogwarts. The students had to create their own ties, badges, wands and capes and were divided into the four houses, all ready to become part of Harry Potter’s world!

On the day, the students entered the classrooms with Harry Potter music, and all of their teachers dressed as characters from the book. The students had to dress in their house colours with their capes, ties and badges they had made. Throughout the day, the students needed to work together in their houses and partake in different activities, such as a treasure hunt around the patio, (with the great help from the older student’s thank you!), making different experiments with the potions teacher Professor Snape, and of course speaking as much English as possible to win points from the teachers.

The highlight of the day was in the afternoon when the students all went to watch the finals of Quidditch in the sports hall. Previously in Physical Education, the students had been learning to play Quidditch and to play a league between the four different houses. On the day, we saw all the students with their team flags creating as much noise as they could, cheering and supporting their teams into victory.

At the end of the day, the English teachers from Primary II awarded many prizes to the students that won the treasure hunt, the Quidditch match and the nine students, one from each year, that made the most effort to speak English all day. We also saw the teachers winning prizes for their amazing costumes!

Having English Day is a great way of highlighting the importance of English in Fuenllana and showing the students that learning a language can also be fun and exciting.